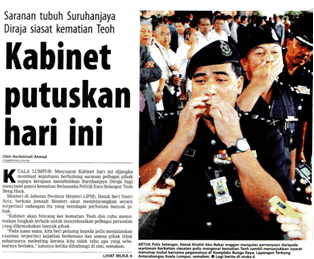 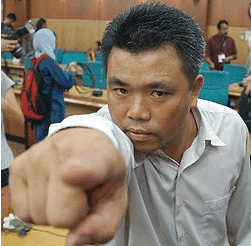 This is a true story. Teoh Beng Hock was getting fed up in his job working for Ean Yong and Ronni Liu. It is an open secret now that Teoh had told his fiancee that he want to quit his job with Ronni Liu and Ean Yong and move back to Melaka. Why? Teoh was known as a bright 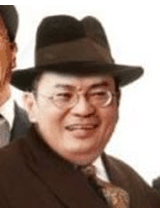 young man with a good future in politics. And he was given a dream job - working for Ronni Liu and Ean Yong at so early age and a bright start to his career. Why did he become so unhappy so quickly with his job that he wants to resign and move back to Melaka?

As the Pengerusi Jawatankuasa Kerajaan Tempatan, Ronni has the power over all the majlis daerah, majlis perbandaran and pihak berkuasa tempatan inside Selangor. What Ronni and Ean Yong doing was to get their underworld friends to set up dummy companies and bid for 'dummy' projects to siphon out the money.

But Teoh Beng Hock was the wrong guy to do their dirty business. Before working for Ronni and Ean Yong, Teoh Beng Hock worked for Tony Pua the other DAP Member of Parlimen. Remember in March 2009 the DAP accused UMNO Youth of bullying Karpal Singh in his 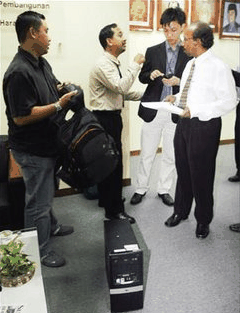 wheelchair in the Parliament. Photographs were showing Karpal Sing "being bullied" by UMNO Youth. Then a few days after that a video appeared which showed the opposite - that the UMNO Youth fellows did not threaten or harm Karpal Singh. They were standing there and were talking in rude way to Karpal. This video was taken by Teoh Beng Hock. This video seriously embarrased the DAP because it shows that the UMNO Youth did not touch Karpal Sing. The DAP was very angry with Teoh Beng Hock for taking this video and giving it to people.

This is the not the first time the DAP was embarrased. Remember a few years ago Theresa Kok 'exposed' a video of a Chinese woman from China being asked to do naked squats in a Police station. Theresa Kok made a big fuss about the video. Then it was exposed that Theresa's claim about Chinese being bullied by Police was false. The girl in the video was a local Malay who was caught for drugs. After that Theresa dropped the issue. The Malay girl was not important to Theresa. She only made an issue when she thought it was a Chinese girl involved. After that Theresa Kok never visited the malay girl or even bother to find out about her - because she is a Malay.

So the DAP is very good at making themsleves stupid. But people always forget. After Teoh Beng Hock exposed the real story about Karpal Sing and his wheelchair, the DAP fired Teoh Beng Hock from working for Tony Pua. Teoh Beng Hock was reassiged to Ronni Liu. Ronni then put Teoh in Sri Kembangan to work for Ean Yong where they can keep an eye on him.

But at that time, after 2008 and in 2009 Ronni and Ean Yong were already siphoning money from the RM500,000 DUN discretionary funds. There were about 250 small projects worth RM50,000 or less which they had used to siphon out the money. These were all false projects or overpriced projects. Dummy companies were set up by Ronni's underworld friends, including bumi companies and also companies registered in China or involving Chinese directors.

The dummy companies then submitted invoices for false projects (which did not exist) or overpriced the projects. If there was any work done, only a small portion of the payments were paid to the project. The rest of the money was siphoned out by Ean Yong and Ronni Liu. Teoh Beng Hock was asked to process the paperwork for his boss Ean Yong. If there were any problems, Ean Yong asked Ronni Liu's help to approve the projects.

For each dummy project, Ean Yong and Ronni Liu took out about RM30,000 or less - small 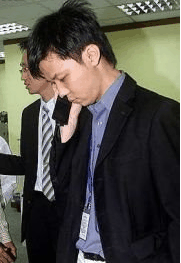 amount. The total number of projects that were dummy is about 250. So Ronni and Ean Yong siphoned out about RM6.0 - RM7.0 million of the rakyat's money from 2008 - 2009. This money was paid into private account controlled by Ean Yong and Ronni. The Police must arrest Ean Yong and Ronni and interrogate them about all these payments and accounts.

Teoh Beng Hock carried all the dummy project details and some of the invoices in his laptop computer which is now with the MACC and now given to the Police Forensics. Before Teoh Beng Hock died, he had agreed to be a witness for the MACC and he also signed a statement which proves the involvement of Ronni Liu and Ean Yong in siphoning rakyat's money from the Selangor State Government. Teoh had also agreed to fetch more documents to prove the connection between Ean Yong, Ronni and the underworld. This is what YB Wee Choo Keong was referring to when he said that there were underworld connections with Pakatan is Selangor.

In the laptop computer there is also a few invoices which Teoh had saved. These are belief to be fake invoice because how can invoices be found inside Teoh's laptop? Not just dummy company, and dummy project but they also manufacture dummy invoice. By 3:45 a.m. Teoh realised that he was in serious trouble. His signed the statement also means that the whole DAP will be exposed as corrupt and fraud. But still Teoh signed the statement with the MACC.

Teoh also received many phone calls when he was driving by himself to the MACC at 5pm the previous day. Police are now trying to find out who are the people who called or sms Teoh. The Police must also check Ronni Liu's handphone and also Ean Yong's. Did both these people call Yeoh and threaten him or frighten him - which caused Teoh to commit suicide?

The evidencs show that Teoh committed suicide. The door to the MACC is a glass door which uses a magnetic swipe card. No one can open the door from inside or outside without swipe card. So no one killed Teoh from outside. The MACC did not kill Teoh because Teoh was their main witness who have signed a statement that Ean Yong and Ronni were already corrupt. Teoh also agreed to bring some more documents as evidencs for MACC. Teoh's statement is also tape recorded and maybe a video record is also available. This is the true story about Teoh Beng Hock, Ean Yong, Ronni Liu and how they siphon money from the rakyat.

They are DAP all corrupt. People must know.