"While serving as Deputy Prime Minister in Malaysia from 1993-1998, Anwar tried to topple then Prime Minister Mahatir Mohamad, himself an anti-Semitic demagogue who made Anwar his protégé. When the attempt to unseat Mahathir failed Anwar was imprisoned for corruption and sodomy. Needing international support to regain power, Anwar has spent the last five years meticulously cultivating a benign image among some of the most influential individuals in the Western world. He describes himself as “a leading proponent of greater cooperation among civilizations” and “an authoritative voice in bridging the gap between East and West.” In private conversations with journalists, he outlandishly compares himself to Aung San Suu Kyi and Nelson Mandela...."
Tembelang Anwar Ibrahim semakin terdedah dan ‘pekong yang membusuk sukar untuk ditutup lagi’. 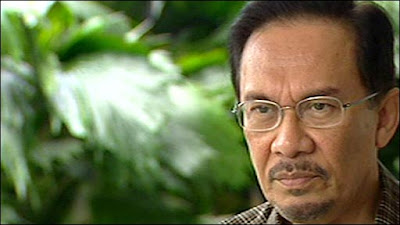