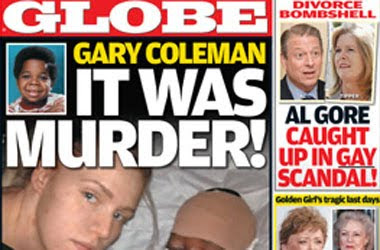 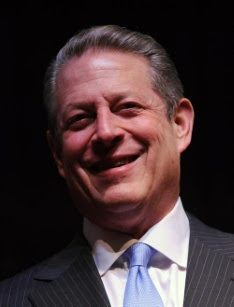 Al Gore and Tipper's divorce split after 40 years is causing the rumor mill to go into overtime and this latest rumor really takes the cake. The demise of Al Gore's marriage was caused by Gore's affair with a gay man!

According to the Globe, Al Gore, 62 and his wife Tipper Gore, 61 divorced after 40 years of marriage because he was "caught up in a nasty gay affair". Supposedly, it was that scandal which led to the ending of their marriage. If that was true, I would be devastated. Let's speculate how Tipper must feel. To be married to a husband for 40 years and after 4 children, you find out he's gay. Wow. That would get me pretty depressed. 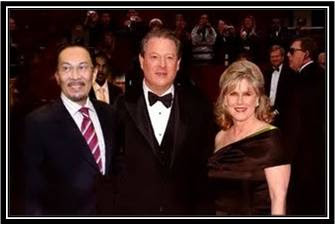 Interestingly enough, another rumor of why they split was that Al's extensive traveling in the last decade to lecture about global warming hurt the marriage quite a bit as Tipper stayed home alone battling depression.

Maybe it wasn't just Tipper's own demons hunting her but the demons of Al's that she was battling with at home.
What can I say, Al Gore was a hero to planet Earth and I love what he has done to educate people about global warming. It's too bad things are getting worse for them as they proceed with the divorce.

Al Gore caught up in a nasty gay affair

Did we really have to wait a whole week before Al and Tipper Gore's split was blamed on a gay affair?

After 40 years of marriage, the rag claims, Tipper found Al "caught up in a nasty gay affair," and that's why their marriage is ending! It's a sad day when the Weekly World News isn't around to counter that Al and Tipper split after she fell in love with a man who is half-bat, half-spider.

Los Angeles, CA -- Former Vice President Al Gore is making his opinion clear. He believes gay & lesbian American citizens should have the same right to marry as heterosexuals. During a speech captured on video, Gore said he does not understand why gay marriage is "considered to be a threat to heterosexual marriage."

The video, posted on Gore's web site Current TV, features Gore sharing his views on equal rights for homosexuals during a recent speech. "I think that gay men and women ought to have the same rights as heterosexual men and women, to make contracts, to have hospital visiting rights and to join together in marriage," Gore stated.

With current frontrunner Democratic presidential candidates Hillary Clinton and Barack Obama saying as little as possible on the subject of gay marriage, the former Vice President's comments could be construed as a jab against their avoidance of the issue. Clinton, Obama and former North Carolina Senator John Edwards have voiced support for increased rights for GLBT people, but have refused to actually endorse equal marriage rights. Edwards' wife Elizabeth is in support of same-sex marriage, but she is not the one running for President.

In the video, Gore voiced disappointment in those who are not supportive of equal marriage rights. "I don't understand why it is considered by some people to be a threat to heterosexual marriage to allow it by gays and lesbians. Shouldn't we be promoting that kind of faithfulness and loyalty to one's partner regardless of sexual orientation?"

Gore's endorsement of same-sex marriage is a step up from his earlier position in support of domestic partner benefits for gays and civil unions--but not gay marriage. During his run in the 2000 presidential race, Gore stated he was in opposition of "changing the intstitution of marriage as it is presently understood--between a man and a woman."

In 2006, Gore spoke about the gay marriage ceremonies in San Francisco in 2004, saying "Some reacted with hatred and anger. What I saw that was just overwhelming was the love, the joy, the purity of the excitement that that love was being honored."

"It is that love, after all, that is at the heart of why everybody is here," said at a gala dinner for the Human Rights Campaign. "That is what must be honored and respected. Your right to fall in love with who you fall in love with. And your right to expect that that will be recognized with the same dignity and honor that love is recognized for other couples."

Gore was heavily lobbied by supporters to join the 2008 presidential race and for a while seemed to be considering the prospect. However, the Nobel Prize winner eventually decided to remain focused on his environmental and human rights work. Gore has yet to endorse any nominee for this year's race.